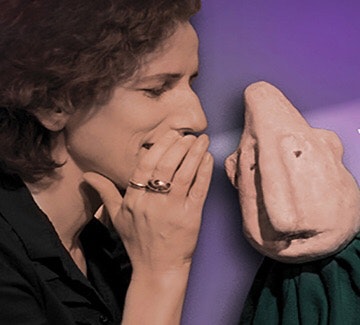 Sue Buckmaster, one of the UK’s leading puppetry practitioners and Artistic Director of Theatre-Rites has created an evening of live un-rehearsed, improvised puppetry.

An acutely sensitive process that usually takes place behind closed doors, the evening will provide a unique and fun opportunity to watch how Sue listens to a puppet, engages a puppeteer and whispers a new character into life.

The Puppet Whisperer was originally a co-production with Little Angel Theatre and first performed at The Little Angel in July 2014, in collaboration with extraordinary puppeteer Adam Bennett.

WARNING: Due to their nature, some puppets may become fragile or offensive and Sue might have to KILL them. All necessary precautions will be taken to avoid causing upset to the audience.

This unusual description of a puppet event was instantly intriguing, sitting somewhere between show and masterclass. In particular the 'warning' notice pitched this piece as something different, something potentially a bit challenging and definitely aimed at an adult audience. I hoped this piece would link in well with some of my own avenues of research where I am considering puppetry within the context of adult theatre and issue based subject matters. The BAC proved a perfect location for this event, quirky and intimate taking place in their library space. The audience seemed to be primarily made up of real puppet enthusiasts and/or practitioners. This became increasingly important and highly useful given the interactive opportunities which developed during the show.

The scene was set with a number of large cardboard boxes in a range of sizes, a large table, small projection screen to the side and Sue Buckmaster sat formally on a chair at the front. She started by introducing herself like the start of a formal masterclass but spoken in a performative style often associated with contemporary theatre/live art. She shared vintage style photographs of her family from by gone era's to show her background rooted in theatre and puppetry. In this style it was initially unclear if what she said was truthful or the establishment of a fictitious character to give the impression of a prestigious 'puppet whisperer' but as it went on it became apparent that yes all of this was true and genuine. She talked about the art of puppet whispering as the process normally undertaken in the shadows of the rehearsal room and now being made public through this show. This would be live puppet whispering and a genuine exchange between director, puppeteer and puppet. Some puppets would be familiar and have worked together already as a rehearsed team, while other would be a total surprise. Sue came to sit within the audience at the centre and in a position to watch, to talk and to direct the action. Experienced puppeteer Adam Bennett was welcomed to the front and opened the first box.

This first puppet depicted in the marketing material, Sue told us was one of her first. A puppet well used and well rehearsed with and yet never given a role in a public performance. Giving us this background to the character established our relationship with the puppet and helped us bond as he came to life. The puppet consisted of a simplistic paper mache head on a T-shirt body. The puppeteer placed one hand on the head to manipulate and one through an arm hole. It was both funny and fascinating to watch the process of directing his motion. Sue would describe emotions and characteristics such as sleepy and shy or more direct instructions such as 'he's lifting his arm to stretch'. She talked directly to the puppet rather than the puppeteer, embodying this character with real life. This was true even when things went a bit wrong such as a weird twist int he fabric or movement when she would need to say something along the lines of 'oh dear your arm looks a bit broken, are you okay?' This moved onto the need for audience interaction. 'where is your other arm? I really think you need a hand' to which an audience member came to join the puppeteering team, shoes were then donated to give him feet and the request for a dance was offered from the floor. This was all incredibly playful and although some elements clearly explored perviously much of it was or certainly felt spontaneous, live and interactive. I was mesmerised by the character brought to life in front of me, taken in by the fun of the performance and intellectually engaged trying to learn and take in the advice and experience offered before me.

Other puppet characters brought to life during the show included a vintage doll, slightly unstuffed to provide movement, transforming this toy into a very effective puppet. A large swan, which was the surprise, chosen secretly by a member of the Theatre-Rites team and totally unknown to the puppeteer or director Sue. We watched as they, together figured out the movement, the controls and the character, again requiring help from willing participants. The final puppet was an old man, probably the most detailed and refined puppet and one clearly familiar to the team. However the main event was the statement 'can you kill a puppet?' and in response a puppet constructed from balloons was revelled from a box. Again we saw this character carefully brought to life, exploring motion, action, character and capabilities. But instead of putting him away in a box for another day a pin was offered to a member of the audience. The puppet was slowly and brutally killed, each limb individually popped as the puppet tried to retain its life. As an audience we were bystanders but all complicit in the deed, no one stopped it though sounds of shock were heard. This event was on the surface harmless, fun, funny and playful however it felt like it had deeper, darker metaphorical undertones. We had been offered a connection with all of these characters, and felt a part of their journey to life during the show however we were willing to watch as one was destroyed. Would it have been so easy if the balloon puppet had more recognisable living character? More of an obvious face, more developed in the use of materials, more time and love in its initial creation? Balloons are of course a temporary product, designed to be popped, destroyed and discarded, so it seemed okay to kill the balloon puppet. How would we feel I wonder if the material was less easily disposable and more related to a really real living thing such as something made of fur.

This show was fantastic for being both enjoyable and very thought provoking. It was unlike anything I had ever seen before, in content and style. In many ways so utterly simple with a low very production value and yet extremely clever in concept, with years of expertise behind it It took something that already happens in the rehearsal room, that as theatre makers and puppeteers we all get to enjoy behinds the scenes and made it performative and made it public. It felt like a show and it felt like a masterclass and both were fine as formats and brought to life through their connection. I liked the spontaneity, the interactivity and the true essence of liveness. This performance captured the imagination and yet was also very raw and truthful. It touched on ideas and concepts which I think could be easily expanded and developed both for the company within the development of this show but also it sparked and confirmed ideas within my own practise. I think in its current form this show is a show for puppet lovers and practitioners and I wonder how it could develop to engage a broader more mainstream audience but there is definitely potential in this fun and creative piece about character, connections, life and death. It also questioned our role as an audience to determine the action, play a part on the action and be complicit in what takes place for good and bad.