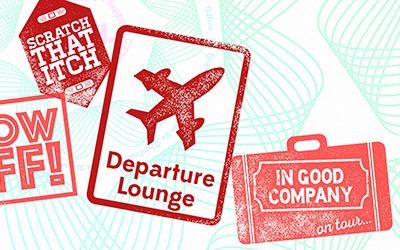 Brilliant News! I will be taking part in the fantastic sharing event Scratch That Itch at Derby Theatre as part of the DEparture Lounge weekend festival!

Below is a list of all the exciting performances:

Lewys Holt - Of, Or At A Fairly Low Temperature

Of, Or At A Fairly Low Temperature is a solo performance in which a man grapples with his inability to authentically emulate the various iterations of coolness that he has encountered throughout his life. The performance consists of stand up comedy, storytelling, discussions and dancing.

Krakatoa is the story of Clarissa Dixon Wright, one of the “Two Fat Ladies”, who overcame childhood abuse and alcoholism to become a controversial celebrity figure inspiring and alienating people with her love of food and the countryside. This is a short piece introducing her as a character and key points in her life including becoming the youngest ever female barrister and losing the love of her life.

A Ship of Fools - The Birds of Paradise

Christmas may never be the same again. The Birds of Paradise is a funny and playful piece that seeks to remind our audience about where our stuff comes from, who makes it and the impact our decisions have on others. We use the magic of Christmas, a celebration of mass consumption, to get the audience on side and play with them before delivering a punch to the gut. This is bouffon theatre at its best; funny, raw and edgy with a message that we can all relate too.

Pupi part 2 is a contemporary piece of puppet theatre for adults, developed as a response to the issue of stray dogs. It has serious and dark undertones presented in a humorous and almost ridiculous manner - with links to clowning and the surreal nature of traditional Czech puppetry. It will use the unique ability of the puppet to go beyond the human performer to show the extreme and the ridiculous. Set up as a satirical style Crufts, this is a dog show of a doomed or parallel future. It is likely that a dog (puppet) will die.

So sexy it's stupid. Helen’s come up with a bold means of exploring her most personal concerns on stage. She’s come across heart-warming revelations and shocking secrets in a sex survey that she released online. Smasher is about all the lip biting, belly tightening qualms that hold us back from intimate connection. Inspired by Helen's experiences of lying like a lady and feeling like a failure, it’s a show that’s hopes to be so sexy it’s stupid. A show that exposes the human beauty of honest idiocy and isn’t afraid to flop (Yes, that was a pun on erectile dysfunction. Disappointing, isn’t it?)

A World’s Child is based on dance theatre combined with a pinch of comedy and drama. The story deals with first impressions and prejudices people are confronted with in daily life, and follows Brünhild and Bartholomew as they confront their prejudices and accept themselves as who they are; a child of the world.