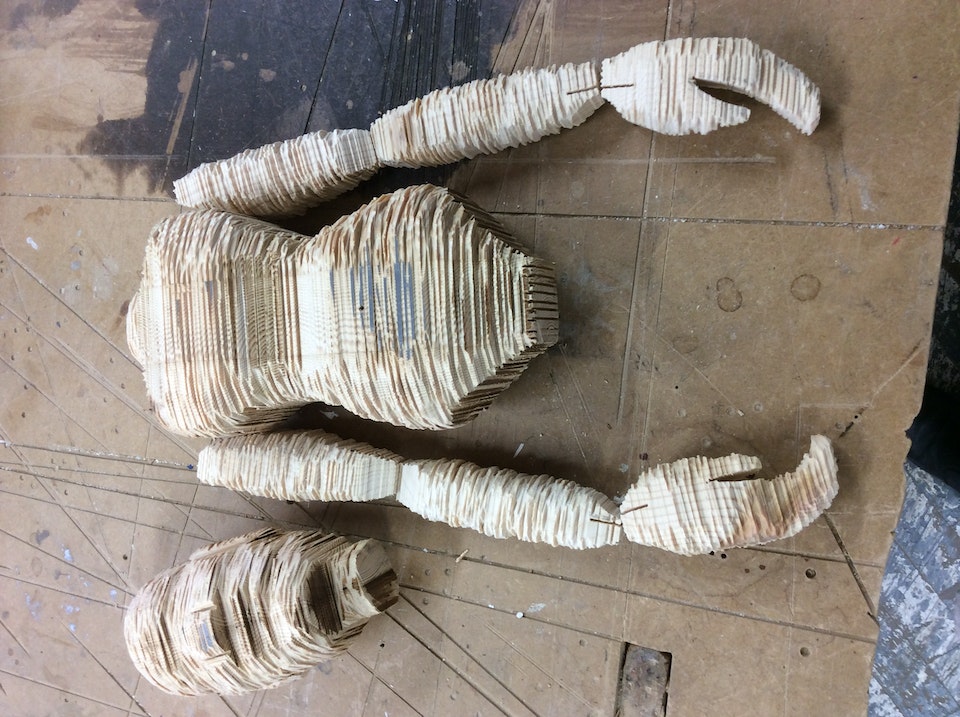 The design concept I am currently developing for the text 'Deep Heat' is based on puppet theatre.  In particular it will feature a single puppet in the 'bunraku' or 'table-top' style of puppetry, operated by three puppeteers.  As this single element is the key to my whole design it seemed appropriate to construct a prototype puppet.  This would enable me to realise design features, explore the puppets capabilities, expand my own practical skills and use the finished puppet to experiment practically with other elements of the design such as lighting and projection.

The design concept for the puppet was based on that of a mannequin, something similar to the wooden figures artists use to draw from.  It was essential that the puppet resembled a human but could provide a blank canvas to represent many different characters both female and male.  I was fascinated by the texture of carved wood when left unrefined and the primitive style this infused.  A contrast between traditional techniques/materials and a contemporary design to match the contemporary stories was my aim and vision.  Texture would also become a highly important aspect of the puppet design which I hoped would lend itself to interesting lighting and project effects. 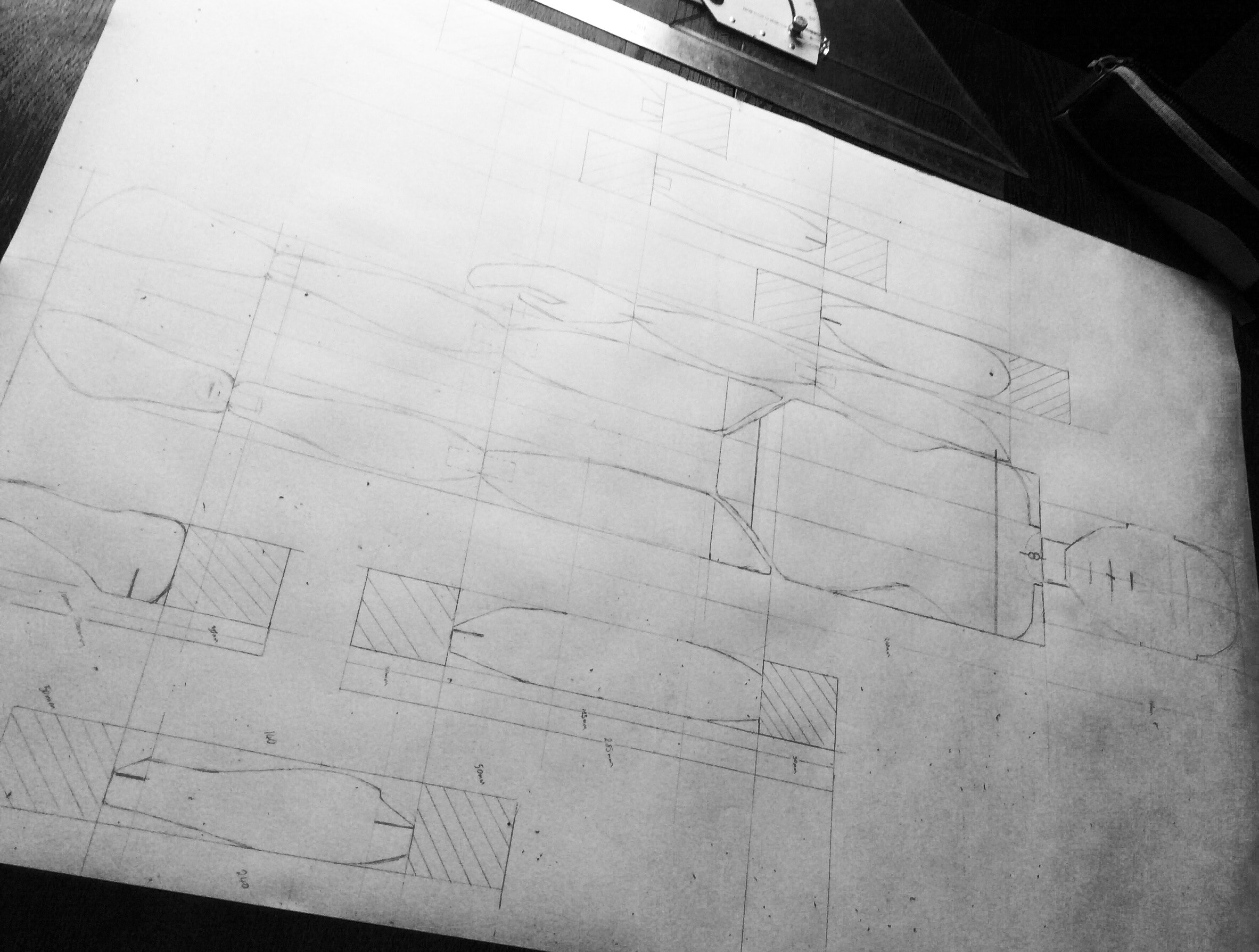 Before beginning the construction I produced an accurate 1:1 scale drawing of the puppet to work from. This took into consideration proportions, side and front views and joint methods.

A digital version of this scale drawing was also produced in VectorWorks so it could be scaled into a technical drawing of the full set design in the Wimbledon Theatre. 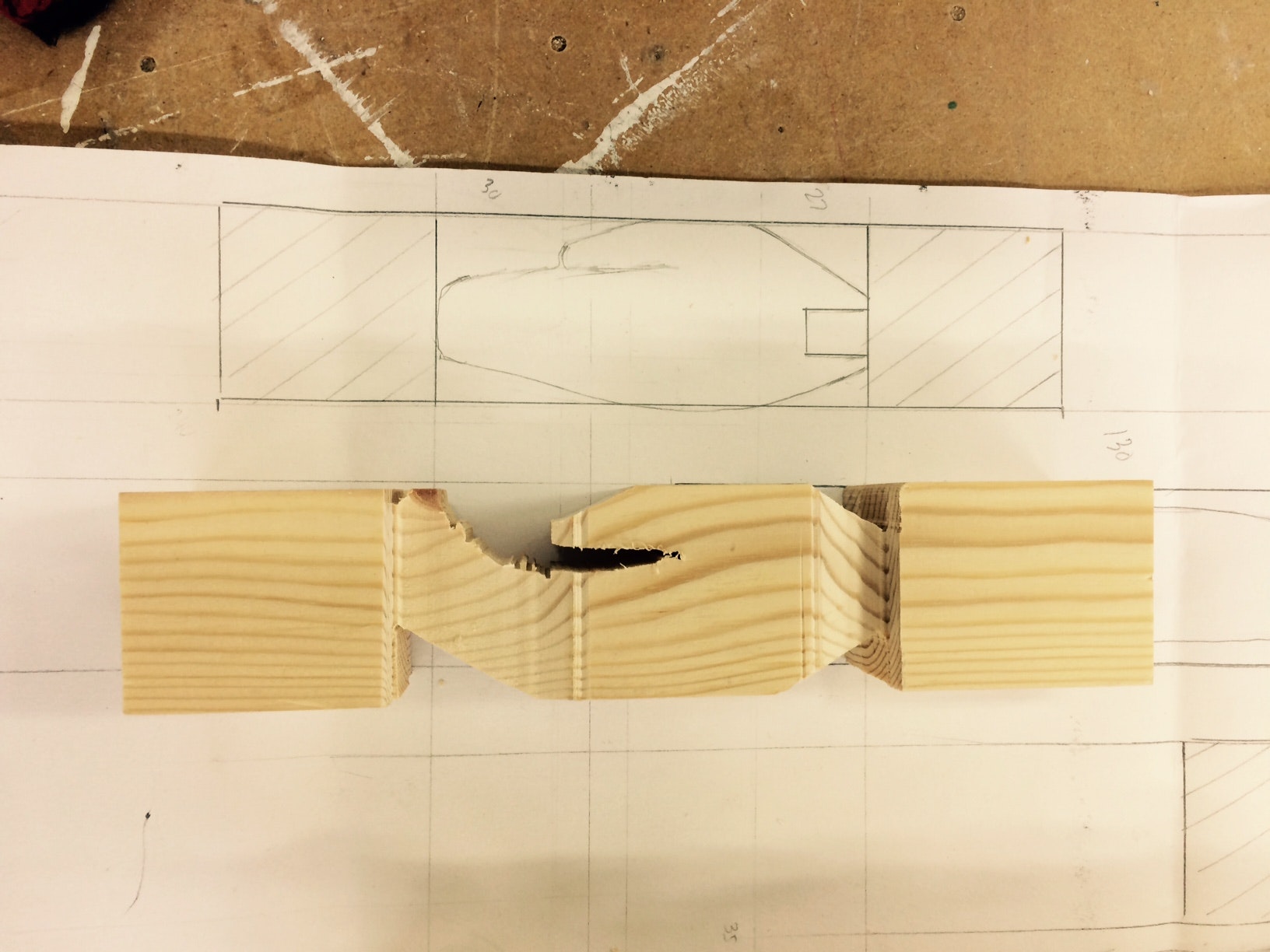 Using the technical drawing, each individual component was carefully marked out in wood and the basic shape cut on the bandsaw.

Sections of wood were left at the ends of small pieces for holding during the carving process.

Usually hard wood is used for carving but in this case pine was used to provide a cheap and easy material suitable for a prototype construction.  A fine grain was used for the detailed head component.

During the process of cutting the basic shapes there were a number of tight corners not easily cut on the bandsaw.  The technique to overcome this obstacle involved cutting many small cuts in the opposite direction before then tackling the final edge.  The result was a highly fascinating texture which instantly appealed to me.  It became apparent that this technique could in fact be used to carve the whole puppet, rounding the corners and adding details.  The result was a layered effect, as if hundreds of thin sections had been carefully joined together and yet old bits of paint and knots in the wood were still visible and  showing the whole.  This technique was quicker than traditional hand carving techniques but was at times very tricky to get adequate detail and quite dangerous as fingers got rather close to the blade of the machine.  However I was extremely pleased with the result and somewhat of a pioneer of an unusual technique.  It was interesting to note that without this practical experiment I would not have discovered this element of the design and it underlined my own feelings about the importance of working directly with materials and staying practical as a designer. 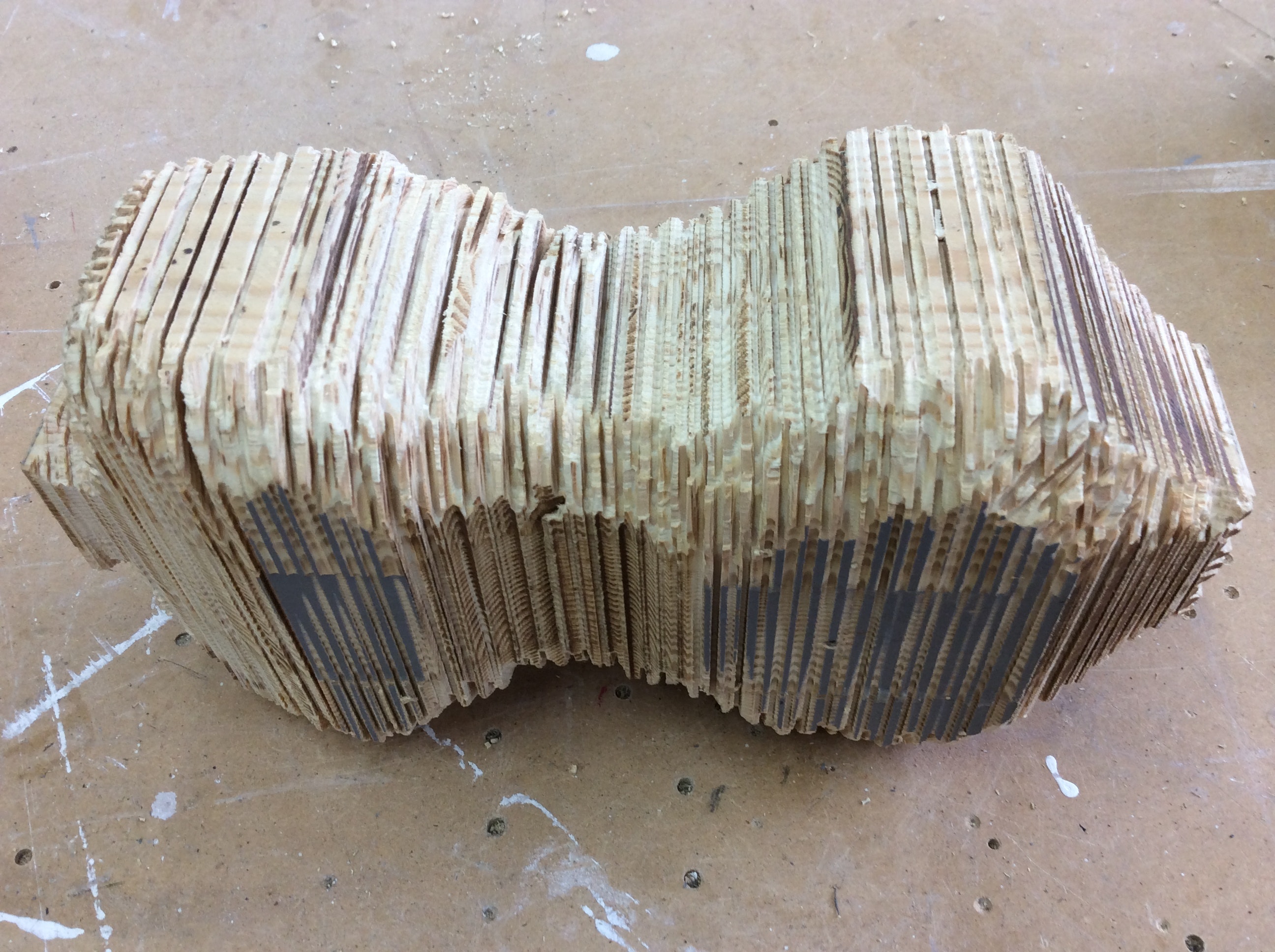 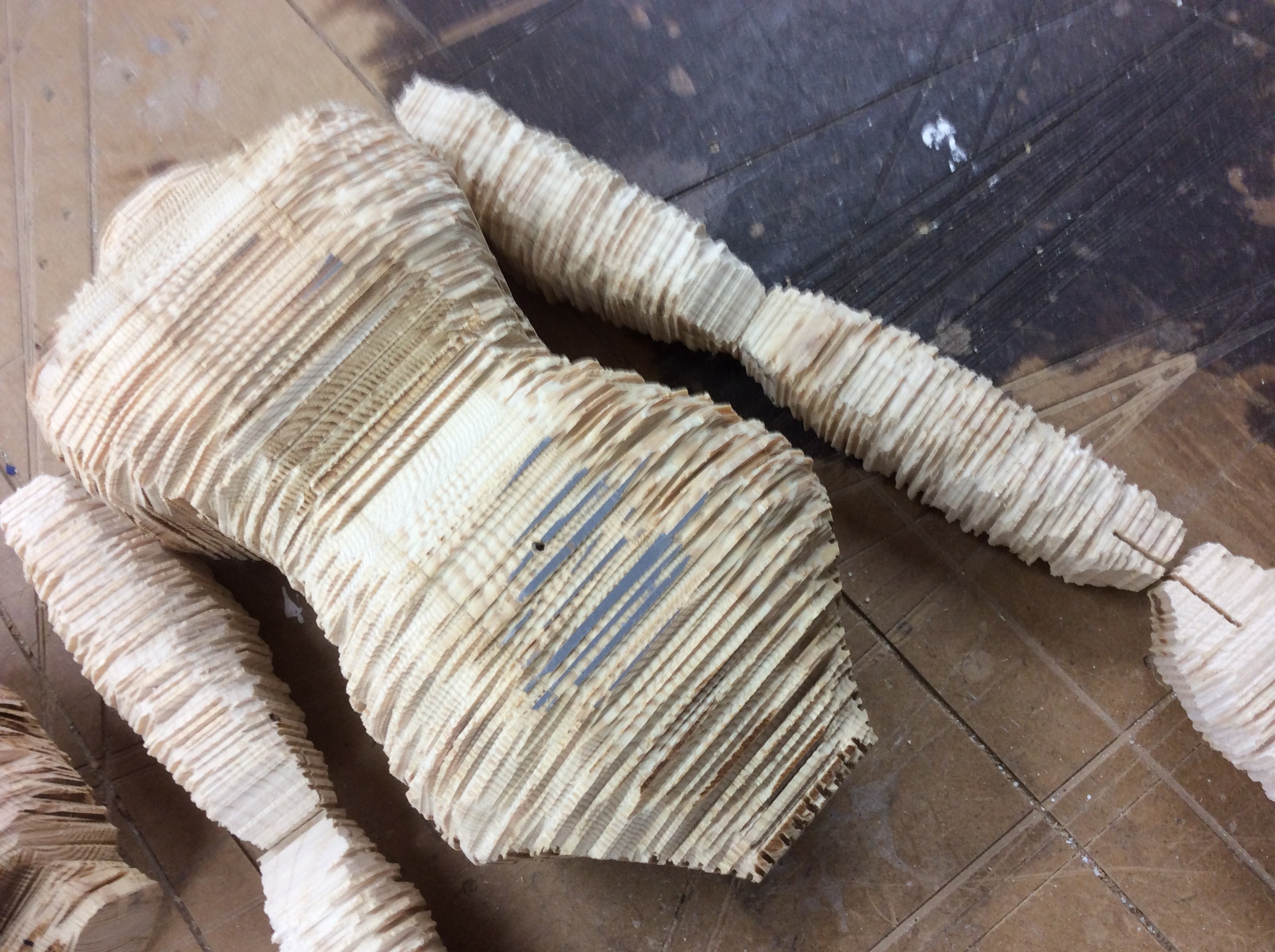 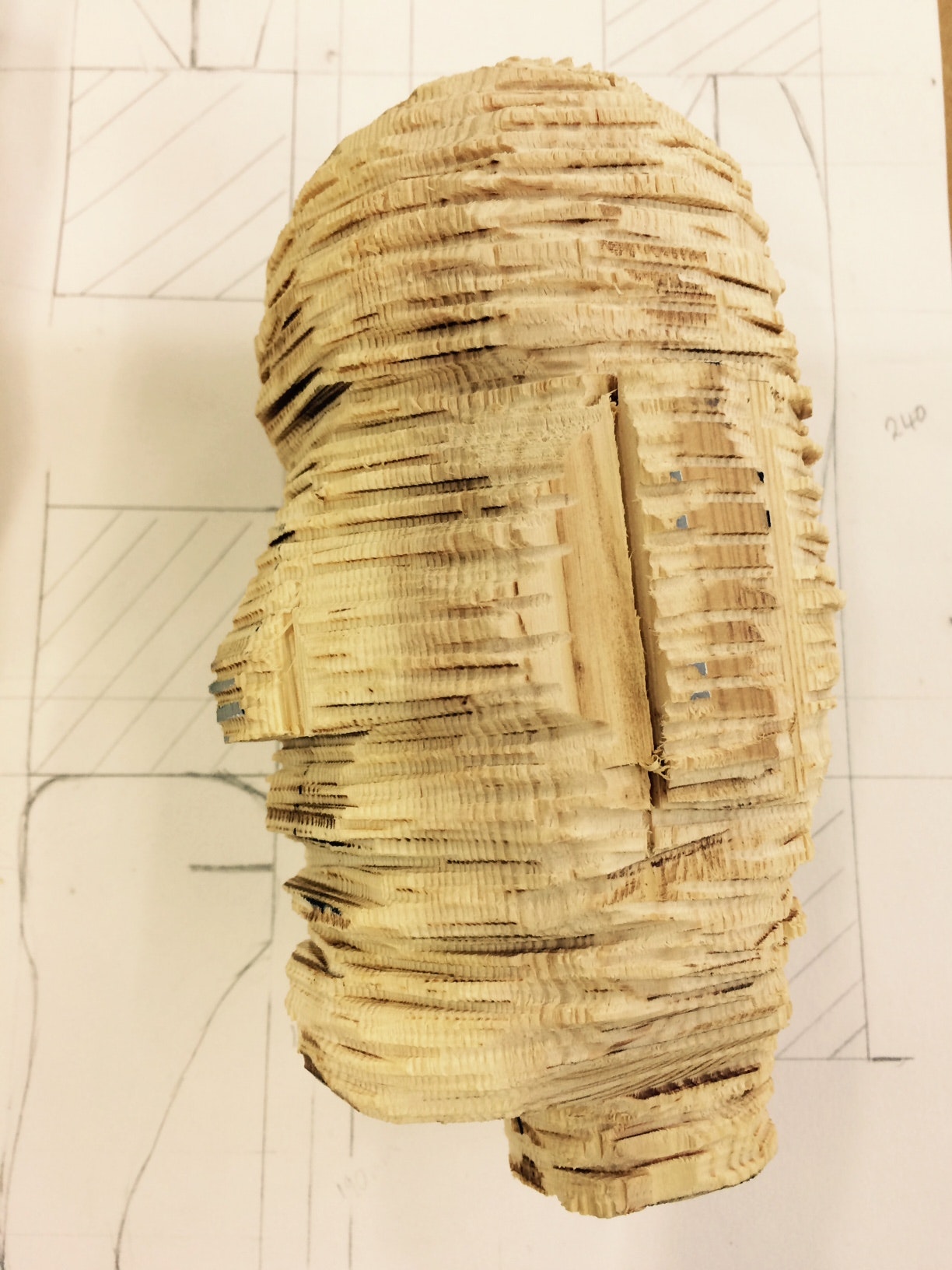 The puppet was assembled using simple leather joints for the wrist, elbows, knees and ankle joints.  Each of these components had been carefully carved so the joints would lock and only move the the correct directions. The shoulder and thigh joints required a fuller range of movements so these were attached using elastic threaded through holes across the body.  The head was the most complex aspect and was created using a spring sunk into the head and body sections. To complete the puppet 2 rods were added as controls one for the head and one to support the body.  A more complex control system would have been nice but due to time constraints and the prototype nature of this project the simple rod system seemed more appropriate. 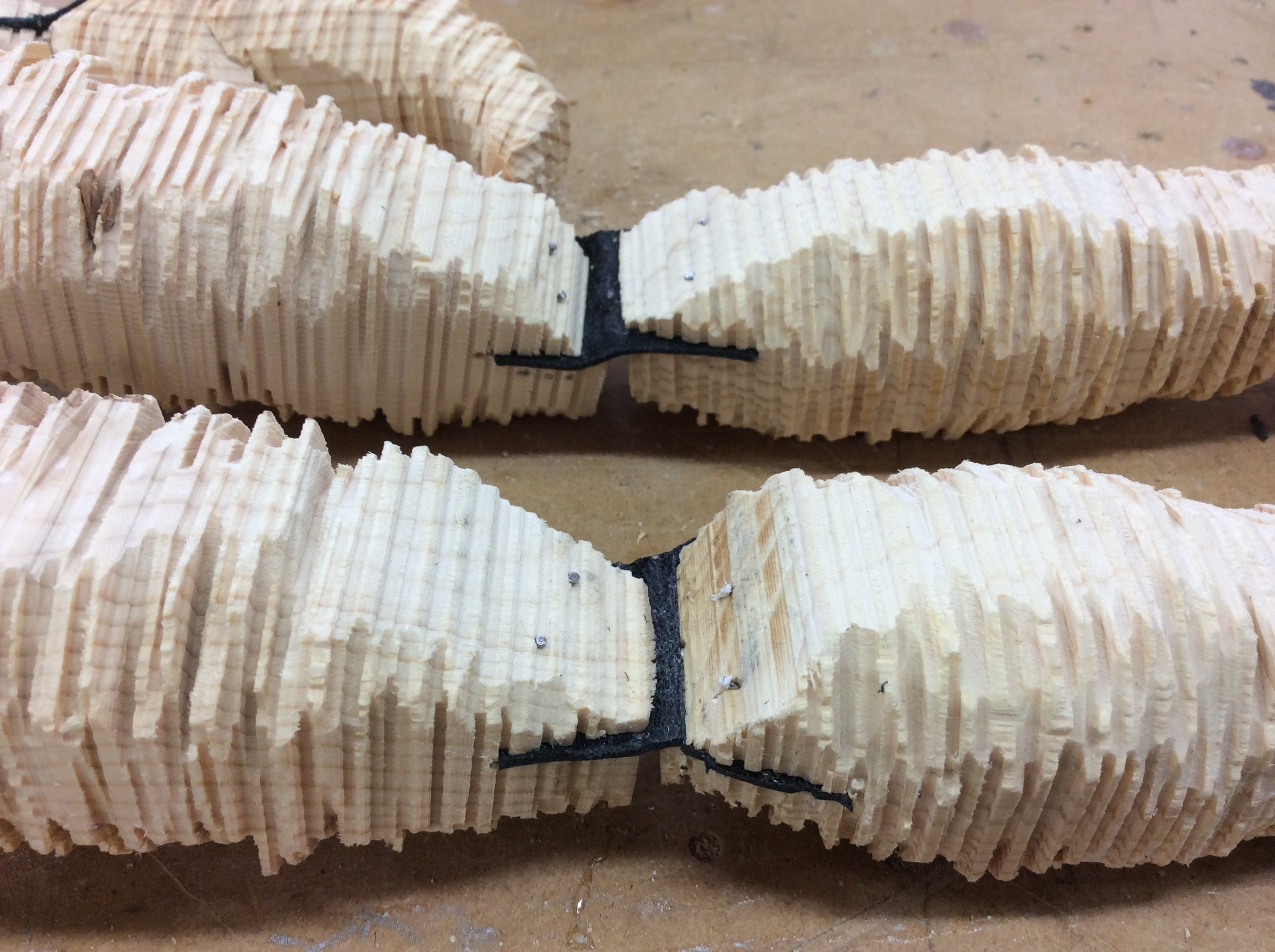 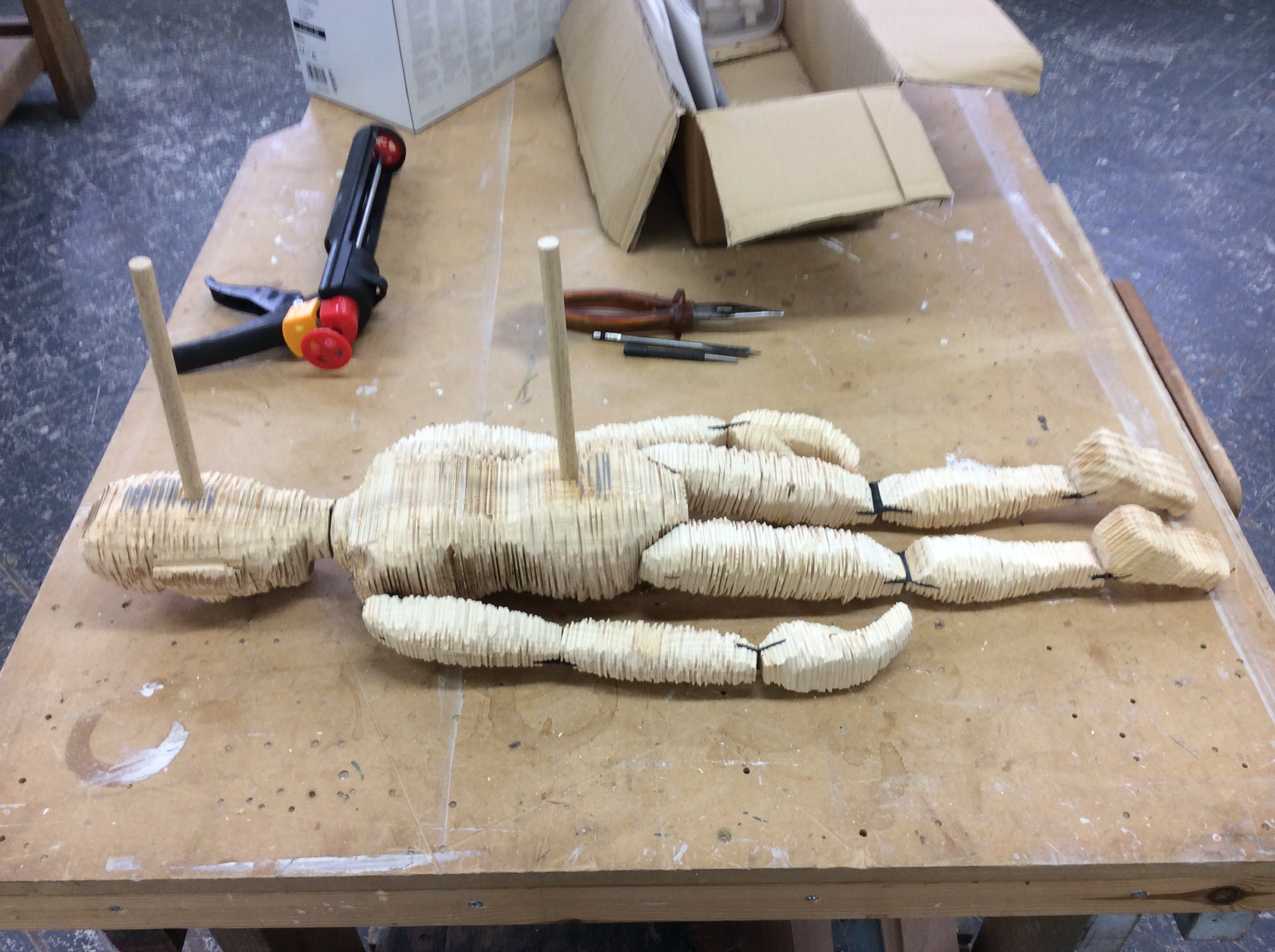 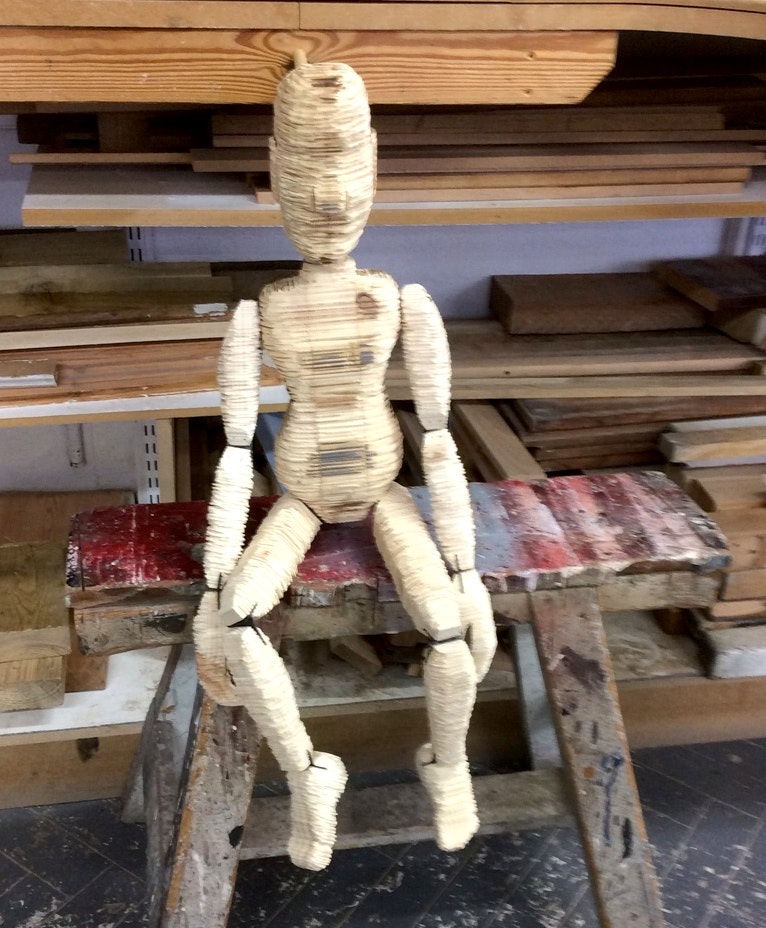 Please visit the portfolio page for a full overview of this concept design project.