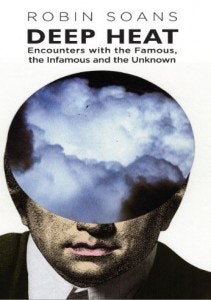 Verbatim is about word for word but editing happens immediately when you tell a story, when you record it and when you perform it.

In tabloid journalism and politics things get packaged up and artists find the media documentation of events an unsatisfactory situations.  They want to looks at things in more detail, they realise that you actually don't know everything.  So you need to exam this, get people involved to talk about it and use there words.  Then its the real people living it.  These voices often are not heard instead its all politicians etc

In journalism the story is often already written, it's fake, preconceived and not the real words of the people.

It's the Humanity of the situation - such as the story in Deep Heat about the journalist doing the cooking for the insurgence, then she gets her period which ends up saving her life.  Thats what interests a play write not facts and politics.

In a way though it is a sort of journalism but without an agenda.  The greatest mistake is to pigeon hole and pre determine a story or person, never judge because

Verbatim theatre looks at things more closely and at the human element,

There is not a huge different between verbatim and regular theatre because all stories come from people and experiences.

How do you choose a subject or person to interview?

This is a very individual decision as a director/writer

'I think people condemn others for their behaviour, I want to understand why people behave as they do.

Theatre is the last bastion of our society

We learn something about a subject but also ourselves in the creation of theatre.  The media is like replaying the movie, it's the image rather than the truth.

Journalists are hard nosed when they interview saying, shouting 'how do you feel!!!!!' This the record which gets put down as the history, but it's forced.

Only around 5% of the total research gets included in a play, it's a huge editing process.  The choices are infinite and everyone would tell a different story with the same material.  In the edit  it's important to juxtapose ideas and feelings, to give it humour or pathos, there are always multiple decision and also things we don't know enough about.

How do you approach a subject/person?

Most people are very willing - people want to be heard.

The domestic detail is important it binds a character to an audience. They form recognition through domestic detail and then relate to those lines and understand what people mean. It creates sympathy and empathy.

It is important to build a narrative with what you are doing and creat a compelling narrative.  This is the case within the stories of Deep Heat, you want to get to the end. A good narrative is an example of good writing.

Create a balance between telling the story without the 'pap' but learning philosophy and humanity on the way,  and incorporate wit and humour along the way too.

There needs to be a clear narrative, so very economical with what is included. This is achieved by broadening the narrative but don't ever fill out what a person says.

When interviewing remember you're not there to talk but to listen - without prejudice! It's a skill to get people to talk, do not judge and do the extra chat - the small talk. 'never forget its someones life'

Yates 'tread softly for you tread on my dreams'

Theatre has a key role for entertainment, to tell stories to inform.

The set helps to supply what is not there and in Verbatim is always a development of the simple chair. Simple design which can suggest different things but is just a selection of furniture is the most successful.  Then as an audience we see things which are not there, it's in the power of the story and the actor.  The best is created with suggestion and imagination.  Just include key items, this creates a short hand, but we see the rest of it, that's the power of the story.  The cleverer you can be as designers the better, develop a short hand, use the imagination.

In theatre the audience are in a respective mood anyway,so open to using their imagination.  It's more powerful to leave stuff out, imagination can be worse. Sometimes when it is the actual thing you limit it, because its the end of your imagination.  So get imaginative juices flowing, don't provide everything.

How do you choose costumes?

The domestic detail is important and being real tot the person.

'Make a note of what they are wearing'  use this and try to be true to it.

Also what was the weather like, where they are and what they do. It about finding the truth and building the scene.  Be sympathetic to their character, so include the domestic detail of clothes, but do not over do it, truthful to what they were, the state of the story teller in their most domestic, quintessential form,

How do you approach the characterisation of the text?

Put in the umm umms where it is relevant to the character, or movements - e.g. rubbing of ear but its a delicate line.  There needs to be truth but also practicalities and also ensure you make the play you want to.  In theatre the character creates an intimaterelationship with audience.  Take the essence of a person, then the actor uses their heart and head to tell the story.  The stories are always much better told in the book or in the theatre than they were originally.  Editing and performance makes them sadder or funnier or more concise.  choose the best bits don't change.

material is high quality - experience, truth behind it

not just a presentation its a representation,  it is a creative process

what is truth - impossible we all edit, odd thing

this is the truth about these people but not prosaically true

not a vast difference - where do you get inspiration anyway? from world around us.

If you say a play is verbatim then the audience comes with preconception, they expect research behind the story and expect you to reveal something,

The stories are extensions of the play-write and his voice is heard within.  In interviewing they play almost the role of the therapist.

If you block someone's aspirations they start to behave differently, they want their story told.

'You might as well cover the sun with mud, the truth will come out.' Deep Heat Ali Boyraz

Please visit the portfolio page for a full overview of this concept design project.