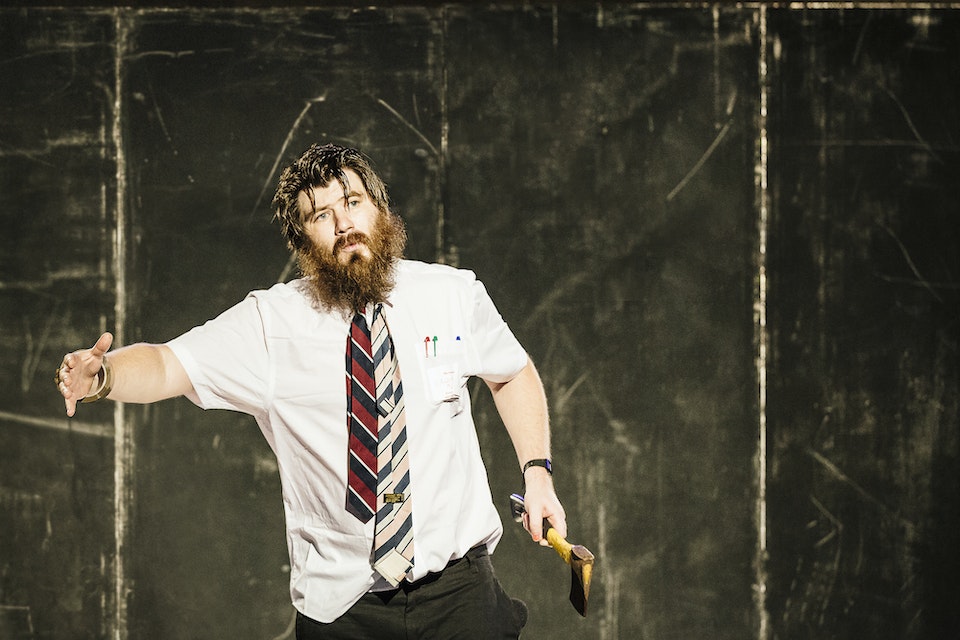 Daniel Oliver is a Performer and Performance Writer based in London. He describes his performance practise as ‘participatory and awkward’ and has just completed a PhD exploring performance participation and awkwardness. More about Daniel’s work can be found on his website. https://danieloliverperformance.wordpress.com/abou...

I conducted an informal interview with Daniel about his work and his notions on the role of the audience in performer and on participation. This was a fantastic opportunity to discuss ideas with a very unique practitioner and so many of his insights fed into my own research and critical paper on contemporary theatre and participation.

Notes from his comments and insights are documented below:

Do you know the artist Tassos Stevens? He has some really interesting ideas about what is the minimum amount of stuff you need to make it believable?
He creates work where he might say lets meet in the park and then we’re in a hospital and then there is a
phone, we have a mission, etc. It may involve saying and showing this is a stick and it represents the woods. Its quite intellectually profound and not as naff as more commercial immersive theatre. Its with exploring.

My research comes from looking at simple looking, at the dominant theory around participatory theatre. This doesn’t always apply to what I do, what reactor do, what the work i see and like.
The argument: is what we need benevolent work, which gets people together for a good time? - (performance) It is a mode for being social instead of having to go to the coffee shop or pub.
We invest in commerce or instead you go to this big participatory art event and its based on the democratic and everybody has agency.

Nicholus Birrio - relational aesthetics - gallery based practise
Makes installations where everyone can come have a curry. Is this art? Is it really open to all when there was controversy around the fact they wouldn’t let homeless people join in?
Its based on telephoning, where our conversation is the art

Grant Kester - conversation pieces
‘art should be good at bringing people together’
interactive performance - concrete goal - we are brought together here to make things better.

Claire Bishop
believes this approach is flawed, democracy is not based on everyone getting along but instead lets disagree but still hang out together
There is some really antagonistic work for example illegal immigrants standing in boxes
sex workers tattooed in return for heroin.

AuntyNazi @ reactor events - most people think its about antagonism but actually the best work is when the participant gets to define if its ambivalent or antagonistic?
That's where awkwardness comes in and it can be overcome through laughter and fun or a row etc
The important thing is to see the awkwardness as an invitation rather than closing something down
The best participatory performances will surprise audiences when they have more than expected freedom. ‘your all free now do this and reflect on liberal culture
We think we have all these choices and freedom but actually we don't
freedom /agency is much more complicated than that.
participatory theatre has that connotation

important that participation gets you involved to participate
good art question participate in what?? What are we entering into? why?
This idea you should throw into something is problematic.

I like to use participation
I enjoy being mischievous
I’m not being nasty
Enjoyment and pleasure is not this defined thing
Its presumptive if I assume that if I tell people to lie down they wont enjoy it.
of course I’m talking about working with people who do not appear seem to be vulnerable.

I don't always get it right and I don’t have an answer
Once I put a guy in a bag and he had a panic attack
I felt bad - something went wrong. I can usually read people really well, That particular scenario happened in on of the few moments in the show I couldn’t end it easily.
There are moments when its gone wrong and I don’t have any excuse I don’t want that to happen. I don’t want to upset. Generally I have enough of a practise and experience to know who to select.

Lone Twin have clear exit strategies
my participants don't but I do.

I can change a joke and by being open to change

To create the kind of space that I want, I want the audience to believe their are no exit strategies.
I kind of presume that if the worst thing that happens is that you go to a piece of theatre and someone makes you do something you don't like then your privileged.
If I think of the ethics from an academic way then its problems
But its only a hour and if people are a bit grumpy or feel they are tricked then its not that big a deal.

The ideal outcome is where someone who cottons on to the game and still continues to play, then they might start to fuck with you and thats fine or they might just go along with it.

there is a whole sexual cultures based on submissiveness and thats not something I've written about but others have and I’ve thought about it.

Its all about the contract you make with your audience.
my work its less evident - in theory its not actually

Kim Noble - comedian, successful now with solo work. Its hard to know whats true and not, doing pretty nasty things to himself. All about being a lonely male - drilling a hole in the wall and recording neighbours having sex.
What is the moment when an audience says no thats enough?

In my work it is important that i'm not entirely trust worthy. People have said they didn't know if I would go mental.

The best outcome is when people have a good time.
It comes down to: What do you find entertaining? I think there is the presumption that if you watch someone walking round with a piece of string it’s punishment when actually boredom is interesting, its a time to think and to experience.

Nicholas Ridout
stage fright - chapter on direct address
the discomfort of participation
He wrote a piece for Tate and takes the position of the experimental practitioner - theatre is rubbish you have to sit in the dark etc but then moves on, he understand the argument really well

I think punch drunk really invest in the idea of a magical event that you save up for and you get excited about. Fan bases even download plans and plan their performance route, maybe they go 40 times to make sure they see everything
Its okay to reclaim theatre as a special magical thing, I find that exciting too but
live art performing (for your mates) thats great, there is something beautiful about that and it stops it being this big thing.

As an example sometimes I just want a cup of tea, for it to be simple - but when the parents visit and they arrive everything becomes an event, out comes the tea set and the trays and napkins.

People to easily complain about micro cultures that just perform to each other.
I’m always careful but tend to presume what me and my friends are doing is what everyone else is doing.

There are the people who like theatre, then a small percentage of those want adventures in a warehouse. The dominant thing that people pursue is a spectator sport. There is something about getting this special thing thats just for you in 1;1 it’s unique, I'm just getting this for me in relation to whats happening in culture. Every street is becoming the same, we all talk about the same stuff - go to Starbucks etc so people pursue these unique and personal experiences.
They might want to be selected from the audience or be the one finding the hidden corner in Punch drunk
I:1 is a bit like therapy - you buy this time with someone and its just about me, there is something important in that.

I don't think I've been to a participatory performance where I've connected with people more than at a regular performance?

Socialising - when people critique this is how people socialise - they assume its important
but then for people with autism socialising makes more sense online without confusing facial expressions. I think we have a limited idea on what socialising is and who it is for. Especially in events which advertise for everyone, they are often actually very specific

Good example a project involving ‘big curries’ for everyone, but there were homeless people getting turfed out on the same street - not inviting the homeless.
what are the underlying exclusions, underlying barriers?

Shannon Jackson writes about that

A performance piece never acknowledges the people who clean the space, sell the tickets etc - they are not mentioned. They are not as therefore as inclusive as they claim to be.

The idea that you have to be a mentally healthy and a socially charismatic person to have a participatory practise is a myth I hate.

If we were doing this participatory piece with dysfunctional kids - yet you would't let them do it?

People describe my character as psychotic and bonkers so people complain - but there needs to be an understanding that clarity is not available to everyone,

boo bar - lone twin - made for young kids so its very abstract
youtube - people said ‘dont show this its like acid this is too weird'
people get offended that it didn't have a story line.

Reactor did a project called 'big lizards' this was a big idea using public sites - looks like a kids piece, so lots of parents come to it but actually a whole backstory for adults
people choose to invest at different levels, but we refuse to do that thing of having a wink wink with the audience. It wasn't a project for kids, people thought it was strage that we were playing and investing in this stuff and it being for adults? Reactor have got really good - bonkers projects around different ways of having fun but also thinking about the world you are caught up in, having fun while looking over your shoulder.