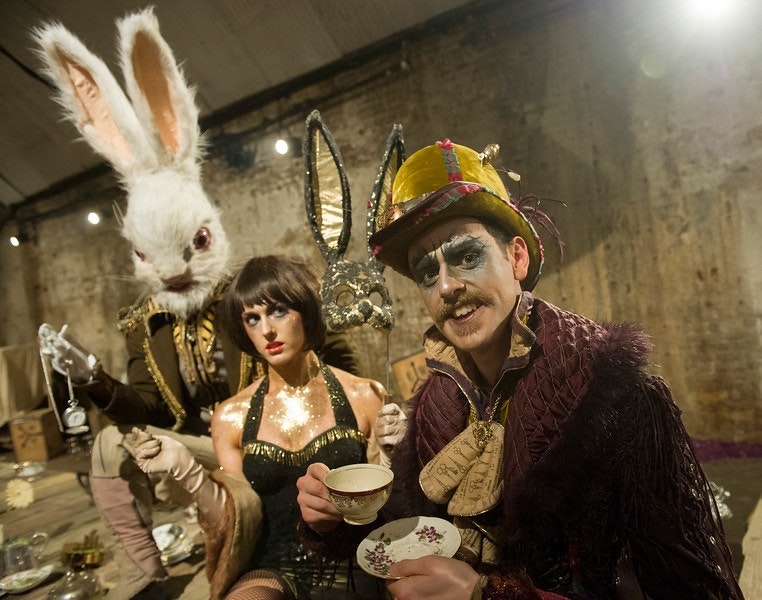 This production was advertised widely as an exciting original and immersive theatre experience. As one of my favourite stories and clearly a piece with an interesting design aesthetic, this seemed a production worth exploring. However I was a little skeptical about the hefty ticket price more associated with the long standing big West End shows, than a first time show in the grungy Waterloo Vaults.

The quirky venue proved very well suited to a roaming, warren like piece and offered a huge variety of unique spaces. There was a good mix of utilised existing spaces and new specially constructed rooms and corridors which really transformed the venue. As the audience I happily lost my sense of direction and was given the feeling of a much larger venue. On arriving the first space which greeted me was an auditorium style space featuring a bar, shop and cloak room and acting as a sort of holding room for people arriving. Already this was suitably upside down in the style of wonderland with the bar where the stage would normally be and the cloakroom at the top of the raised seating. Drinks were not allowed in the performance for obvious reasons but I was offered some rather tasty alcoholic sweets as a fun alternative.

At the allotted performance time we gathered as a group of about 50 and were taken out of he building and round to another entrance. The first room was an electric mix of vintage flotsam and jetsam, and seemed to resemble the room of a writer or explorer. It featured photographs, wonky book shelves, mirrors, pictures, ornaments and furniture. It was a feast for the eyes though very cramped with a large group of people. As means of an introduction a projection of a prerecorded Alice appeared in some of the mirrors, conveniently placed at each corner so everyone could see. Although this seemed visually quite interesting the sound quality was a bit muffled and I found what she said more of a riddle. This worked quite well given the story and would set the tone for much of what was said - confusing, fascinating and baffling.

From this room we were led down a winding tunnel filled with book pages on the walls, and book covers on the floor. This was a wonderfully sensory space which although unrefined in construction, magical all the same. This led to one of my favourite spaces, a multi walled room of mirrors, with a central pillar and a domed ceiling which displayed a projected animation. This room opened up to reveal a stage like room framed by a kind of proscenium arch. The floor was wanky and there were the well known big and small doors from the storybook. Here we met the characters for the first time, the rabbit and one of the cards. We were offered either a drink or a sweet and divided into two groups through the separate doors. At first I was disappointed to be split from my friend I had come to spend the evening with but actually the whole experience was enhanced by meeting new people and sharing our different stories and journeys at the end.

One of the key successes of this piece was the way the group was split up into 4 groups according to card suits and given very different experiences and journeys. Meeting different characters, seeing some different spaces and hearing different stories. It was fascinating how these were then brought together again at the end and we all came to realise the differences. It was extremely clever, well managed and carefully planned to work in a relatively small space with a very quick turn around of audience. It would be interesting to return to experience an alternative journey and be more aware of the other groups and possible doubling in characters.

The characters we met included lots of puppetry to really capture and create the magical creatures of wonderland. The most successful of these was the Cheshire Cat, manipulated by 3 puppeteers in a bun raku style, with a separate head and body. Its style was suitably different from the

iconic pink one from the disney film. This character was sexy and manipulative with a good mix of possible darkness and goodness. It spoke in riddles, disappeared and reappeared through the walls and even transformed through the use of a separate large scale head. Another key puppet was of the caterpillar and although clearly well made with a fabric body and multiple moving eyes, for me this puppet seemed a bit stiff for the fluidity of the character and luxurious fabric setting it resided in. The puppet had a long speech so the limited movement of the mouth was the key problem, which a hand puppet style may have solved.

Other exciting characters included Tweedle Dee and Tweedle Dum who swung from the ceiling on a kind of trapeze. Other we met included Alice, the white rabbit, various cards, the cook and his wife and then of course the Mad-hatter, door mouse and hare at the tea party. The tea party was by far the most impressive setting and probably the key inspiration for the whole production. Set in a long thin tunnel, with a large table, barrels and boxes for seats and a large clock at the far end. This was a very impressive location, enhanced by the tasteful dressing. It retained the dark, dingy, dank and industrial qualities of the original space and created a powerful atmosphere through the scale and performances. The actors jumped across the table, using it effectively as their stage, talking in riddles and interacting with the audience.

The audience interaction occurred throughout the piece with a mixture of rehearsed and spontaneous reactions. The cards which acted as each groups individual guide seemed to have the most potential for genuine interaction though their time was limited, their goal for getting us through the space their main concern and actually their confidence and skill to stay in character a little bit limited compared to the main figures. The promenade nature of the piece and the wide range of locations, setting and characters made this piece feel very active as an audience due to the constantly changing surrounding, however the true level of interaction was limited. The actors had their scripts, the groups had their set routes and time was extremely well managed and indeed very rushed at some points. The text throughout seemed secondary to the visual, it was often vey confusing and spoken in riddle, but generally I thought this worked for the piece and I was happy to let much of it wash over and to be a bit perplexed and confused. It was surprising how much had been gathered and pieced together in our heads to be made sense of in the final court room.

The court room brought all 4 groups back together and gave each team an opportunity to perform or say something unique to demonstrate their different journeys. The space was suitably impressive, the queen dark and angry and altogether a great finale to the production. Alice herself was overall a bit weak, a bit safe and a bit too nice. We actually didn't see that much of her until the end and in many ways we were playing her role so she perhaps becomes less important. However overall I guess I wanted Alice and indeed many of the characters to be darker, more weird, more mysterious and perhaps even a bit brutal, so this theatre version becomes more extreme from the disney or Tim Burton versions we are familiar with. The winding corridors could have become more sinister and the the kitchen for example more violent, but it felt this piece was being designed for the masses as entertainment - challenging conventional space but not conventional content.

Overall I was pleasantly surprised, it was certainly a unique experience which was a fun and entertaining night out. It was visually well designed with great detail in the costumes and creativity in the overall aesthetic. As a temporary piece of theatre at times the build quality in some areas seemed a bit shabby and I could imagine without the atmospheric lights some places would be very basic indeed. The potential of this piece was really clear and I think if there was a slightly longer run and therefore less groups per night it could really benefit. In particular there would more time for audience exploration and for the actors to really play in the space with each group. A darker late night show would be a great development and then the piece would move forward from a fun visual feast to something much more intense.

Here is a link to a great review featuring lots of the designs by the very talented Samuel Wyer.