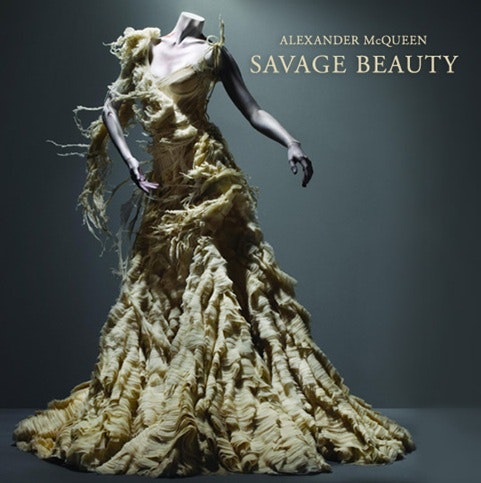 As a long term fan of the work of Alexander McQueen I awaited this exhibition at the V&A with great anticipation. I have always loved the dramatic fashion shows and controversial styles associated with his work, often more a kin to the extremes of theatre costume than the more commercial fashion world. This exhibition further accentuated this link with the theatrical and proved the most inspiring and dynamic exhibition I have possibly ever witnessed. The settings as well as the work included were mind blowing, with detail, beauty and often a serious underlining message or theme. This would prove an experience to remember.

Throughout the exhibition were large scale quotes from McQueen, which gave us a valuable insight into his thoughts, feelings and opinions on life, fashion and society. I found many of these moving and insightful and scribbled many down with enthusiasm for future reference and inspiration.

"I find beauty in the grotesque, like most artists. I have to force people to look at things."

"You've got to know the rules to break them. That's what I'm here for, to demolish the rules but to keep the tradition."

The first room featuring his early work, was the most conventional. It featured mannequins around the edges raised slightly on a stage. the colours were generally muted blacks and greys but the tailoring was exquisite with clean lines and interesting shapes. It was interesting to learn that he started out as a tailor on Saville row before training in fashion at St Martins. This understanding of the figure and how fabrics lie and can be cut and manipulated is clearly what underpinned so much of his work and allowed him the creative freedom to create exaggerated statements while still making garments which look good on the body.

The second room was where both the setting and the collection really began to show as something very special. It was filled with ornate glass display cabinets and impressive vintage style mirrors. The setting was impressive but also very in keeping with the grandness of the V&A, at this stage it was slightly unclear whether this was grade objects from the gallery collection or bespoke items for the exhibition. On closer inspection it became apparent that in fact these were totally bespoke, designed to show off the 3D form of the clothes, to emphasise the gothic styles, create a grand statement and a clear sense of the theatrical. The clothes themselves were generally black with a victoriana style. They were exaggerated shapes, layers of thick fabrics and some interesting materials including bones and skulls. This was a room I felt the clothes began to develop that exaggerated, costume statements but were largely still wearable as fashion garments.

This macabre theme was further developed in the next room, a cave like structure completely covered in a wall texture of bones. The centre featured a kind of domes eye, with an abstract projection. The clothes displayed in alcoves lines the circular room. From a distance all were beautiful examples of couture fashion and yet on closer inspection were darker in nature. An elegant green dress of beads, with a human hair skirt, a figure hugging swede jacket with horns jutting out from the shoulders. This room was an inspiring mix of materials and ideas, exploring what is beautiful and generating a clear audience reaction of surprise and sometimes disgust.

The next room was a grand aisle in reds and golds, leading towards a monarch like figure. The collection featured his Scottish collection which reflected on history but using contemporary styles. The powerful classical music added to the grandness of the space. This was followed by possible the most impressive and certainly the busiest room, set up as a giant cabinet of curiosity. Every wall was lines with shelves of different sizes, packed with accessories, mannequins, TV screens and objects. An already high ceiling was further emphasised by mirrors near the floor. This truly was a feast for the eyes, everywhere you looked were new colours, textures, styles and shapes. The screens showed video's of the live fashion shows featuring many of the objects in the room, bring a sense of life and performance.

Other rooms included one dedicated to a very natural, neutral theme and featuring one of my favourite pieces with the thick veil over large antlers. One of the most exciting things in this room was the intricate wall paper which at first glance appeared as flowers but on closer inspection was considerably darker with skulls, strange hands and wilting flowers. There was a room set up with music box style dresses turning slowly in mirrored alcoves. The mirrors showed the whole garment in all its detail and were so crystal clear it was at times difficult to distinguish real from reflection. The final room was a more futuristic affair with a pumping soundtrack and radical shapes in synthetic often metallic fabrics. This style was less appealing to me and with such a huge exhibition my ability to absorb these final elements was limited.

I found the descriptions, quotes and ideas behind each collection truly inspiring. There were challenging messages and meanings behind his work adding genuine depth in an often shallow industry. Having also visited the process based exhibition at the Tate Britain documenting his final collection I was very aware of the social issues he attempted to tackle through his art. I could see that with his fame and success within the industry, also came the opportunity to challenge and make fun of some of its ridiculousness. The signature make-up look with the red lips reminiscent of a clown rather than a beautiful model is a classic example of his challenge on beauty and fashion. Most of his models have some kind of head covering adding to their anonymity, their irrelevance as people, and need to be walking mannequins of often unnatural proportions. This aspect of anonymity I find interesting and could be explored within my adult puppetry project where the puppeteers play a role as the antagonist of the puppet and can work metaphorically through this neutralising effect.