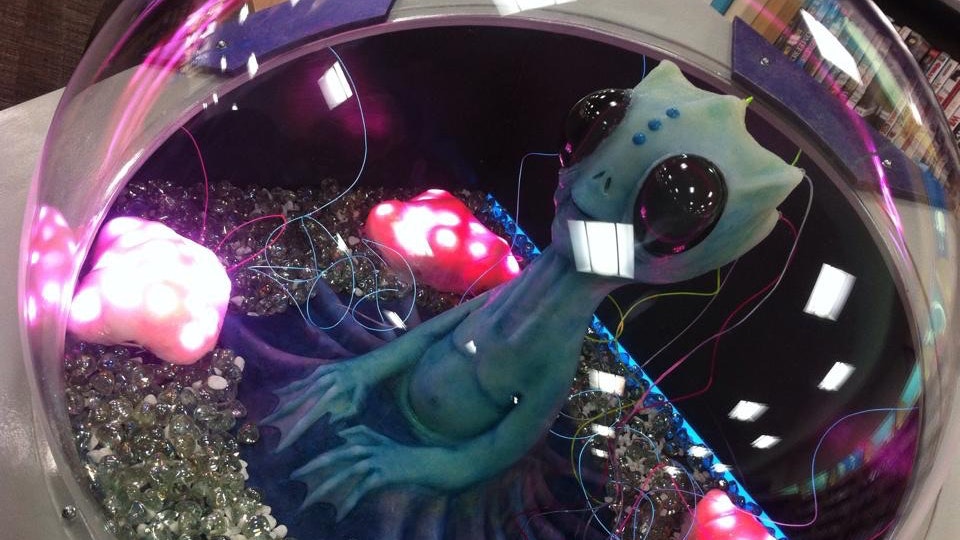 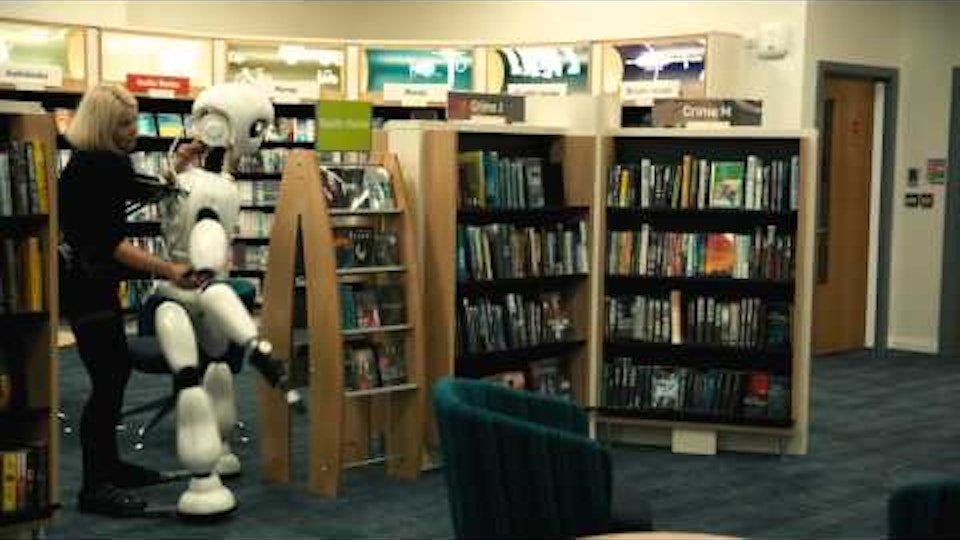 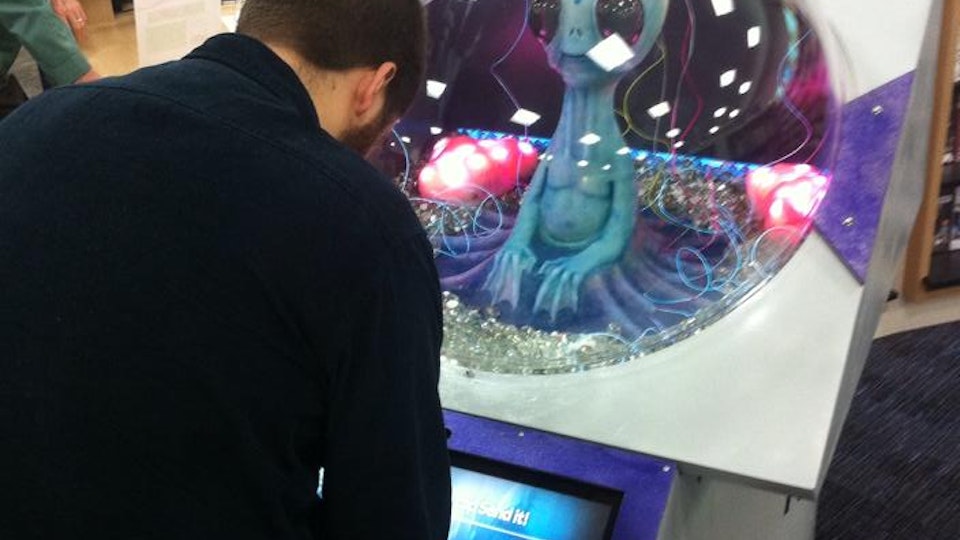 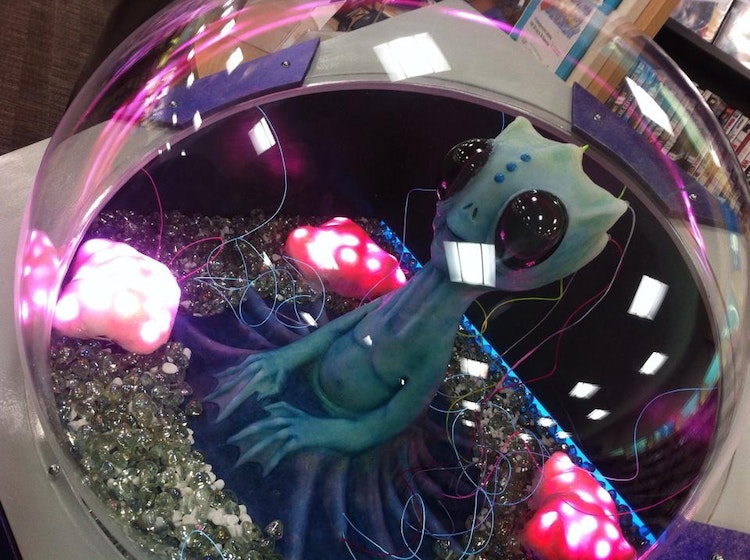 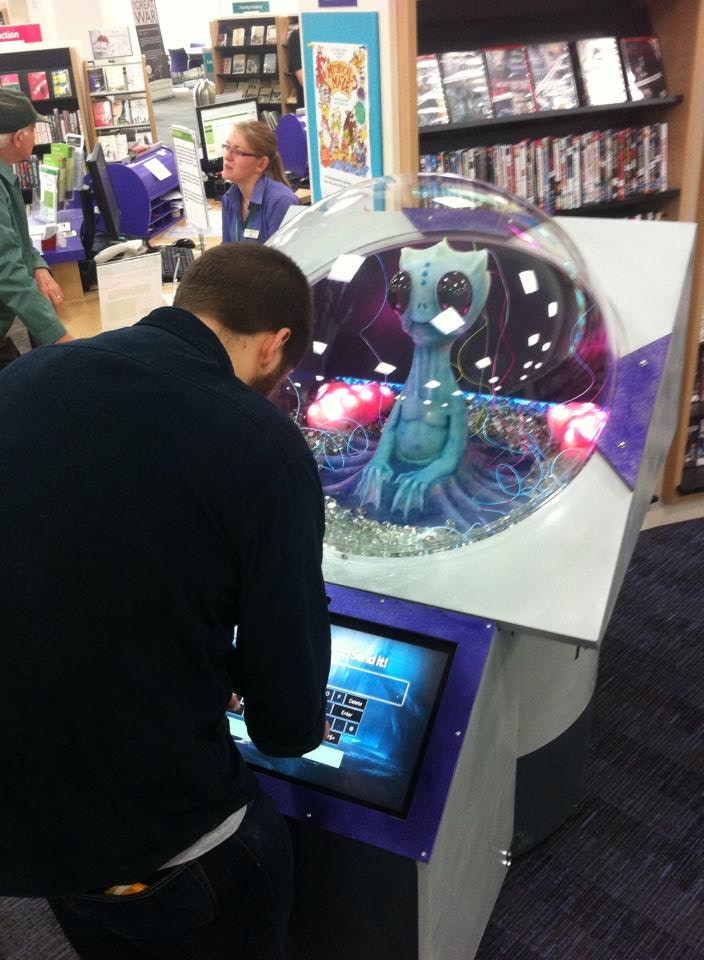 In Summer 2014, Polymath recieved a unique commission from Near Now digital art organisation based at Broadway cinema in Nottingham. The project was a collaboration with Mansfield Central Library to create a digital prototype designed to increase their creative offer through the use of digital technology.

The response was MILO.

MILO – Mega Intelligent Learning Organism – is a semi permanent installation that takes the form of an alien creature that interacts with the public through cutting edge technology and explores different re-programmable themes.

MILO started as a mockup that looked more like an octopus in a jar! This rough diagram shows how we initially imaged the technology that would bring MILO to life.

Once we had sign off on the concept we started to build the software system and sketch up initial creature designs. We took inspiration from creatures both real and imagined – from sea creatures to conceptual aliens from sci-fi comics.

We approached prosthetic artist Jayne Hyman to create the physical creature from silicon. Jayne created some 3D sketches of MILO from our sketched designs.

Jayne started with a clay sculpture and then used this to create a fibreglass mold. The mold was then used to cast the creature from silicon.

At this point MILO started to take on real character. Details in the skin and face started to inform how the character should behave and interact with its audience.

Meanwhile we had lots of fun playing with RGB LEDs and electroluminescent wire. This was bought online and then modified to fit the creature. The plastic tubes we placed within the mold allowed us to push the wire through. This wire, connected to a power source, becomes illuminated and creates the effect of glowing hair or tendrils.

The great thing about RGB LEDs is that they are programmable. You can tell them when to display a certain colour and brightness and even trigger them in response to audio or software commands. So we played around with these and integrated them into the overall design.

They change colour according to which section of the software interaction an audience member is engaged with.

Another major part of the build process was the ‘tank’ as it became known. This was where MILO was to be housed along with its power and electronics. We wanted to incorporate a dome so that MILO could be viewed from more than just one front-on angle. So we asked carpenter Gareth Hustwaite to build the wooden base section that the dome would fit into.

The dome was made from acrylic and bought from a stock supplier who had previously made dome structures for movies such as Prometheus.

Once we had these elements – the tank, the dome, the silicon creature, the EL wire and RGB LEDs, the computer and the touch screen – we set about piecing MILO together.

Like any tech based project it is important to have a period of testing but due to time constraints we only had a short time to do this. Fortunately, we were able to draw on our experiences from creating Puppit + Digit and a lot of the potential pitfalls were avoided. This mainly included software interaction elements but also some hardware related issues.

MILO started to come to life once he was in his tank. Lighting and software tests went really well and so it was just a case of breaking him down for transport to the library.

A few finishing touches were necessary to get MILO ready to meet the public.

The response from the public has been fantastic and MILO is settling into his new home well. The 20 inch touch screen is great despite having to commission a custom driver to get it work with Linux! The software is re-programmable to allow library staff to update the themes that MILO explores with the library users and this means that staff at the library engage with technology in a way that is completely different and unique.